Browse: Home   /   Queen Single from over the world

Queen Single from over the world

According to Mark Hodkinson, author of Queen: The Early Years, “Keep Yourself Alive” was conceived on acoustic guitars during Queen’s practice sessions at Imperial College and the garden at Ferry Road in 1970. At the time Queen had not yet found a permanent bassist; the group consisted of guitarist Brian May, singer Freddie Mercury and drummer Roger Taylor. In a radio special about their 1977 album News of the World, May said he had penned the lyrics thinking of them as ironic and tongue-in-cheek, but their sense was completely changed when Freddie Mercury sang them.

The first version of “Keep Yourself Alive” was recorded in summer 1971 at De Lane Lea Studios. It was produced by Louie Austin and includes the intro played on Brian May’s Hairfred acoustic guitar. All of the song elements were already present, including call-and-response vocals by Freddie Mercury (verses) and during the break, where Roger Taylor sang a line and Mercury answered it. This demo version remains Brian May’s favourite take of the song.

Subsequently they did several attempts to “recapture the magic” when they went on to do the “real” version at Trident Studios. The one mixed by Mike Stone was the only one moderately accepted, and it’s the one released as single. It includes Freddie Mercury doing all of the harmony vocals in the chorus (multi-tracking himself) and Brian May singing the “two steps nearer to my grave” line instead of Mercury (who did it live and in earlier versions). This recording does not use acoustic guitar; the printed transcription on EMI Music Publishing’s Off the Record’ sheet music lists at least seven electric guitar parts, one of which uses a prominent phasing effect. It can also be noted that this recording includes the line “Come on and get it, get it, get it boy, keep yourself alive,” which was not in the original version.

EMI Records released “Keep Yourself Alive” as a single in the United Kingdom on 6 July 1973, a week before Queen hit the stores. A few months later, on 9 October 1973, Elektra Records released the single in the United States. However, “Keep Yourself Alive” received little radio airplay and was largely ignored on both sides of the Atlantic; it failed to chart in either the UK or the US. According to Queen biographer Mark Hodkinson, although “on five separate occasions EMI’s pluggers attempted to secure it space on Britain’s Radio 1 play list”, they were denied each time, reportedly because the record “took too long to happen”. “Keep Yourself Alive” remains the only Queen single not to have charted in the UK.

The single received mixed reviews from the British music press. New Musical Express praised the “cleanly recorded” song, as well as the “good singer”, and quipped that if Queen “look half as good as they sound, they could be huge”. The reviewer for Melody Maker felt that Queen “made an impressive debut with a heavily phased guitar intro and energetic vocal attack”; however, he thought the song to be unoriginal, and unlikely to become a hit. On the other hand, Disc magazine’s critic believed the single “should do well”. The review praised “Keep Yourself Alive”‘s drum solo, as well as its “attractively stilted, vaguely Hendrix-y lead riff”. The South Yorkshire Times rated the single as “good”; the newspaper predicted that “if this debut sound from Queen is anything to go by, they should make very interesting listening in the future.” In his album review of Queen for Rolling Stone, Gordon Fletcher hailed “Keep Yourself Alive” as “a truly awesome move for the jugular”.

Retrospectively, “Keep Yourself Alive” is cited as the highlight of Queen’s otherwise inconsistent debut album. Stephen Thomas Erlewine of Allmusic wrote that while Queen “too often . . . plays like a succession of ideas instead of succinct songs”, “there is an exception to that rule — the wild, rampaging opener ‘Keep Yourself Alive,’ one of their very best songs”. In 2008, Rolling Stone rated the song 31st on its list of “The 100 Greatest Guitar Songs of All Time”. The magazine dubbed “Keep Yourself Alive” as “Brian May’s statement of purpose: a phalanx of overdubbed guitars crying out in unison, with rhythm and texture from over-the-top effects. . . . an entire album’s worth of riffs crammed into a single song.” 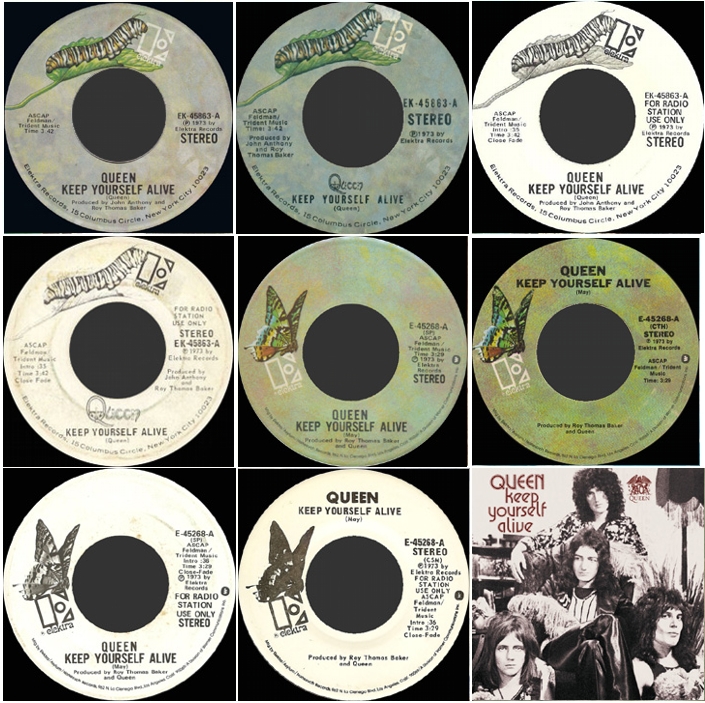 Written by the lead singer Freddie Mercury in 1970, and originally titled “Lover”. The song featured on the band’s 1973 debut album Queen and it makes prominent use of the flanging effect, especially on the drums and cowbell. A heavily truncated version of “Liar” was released as a single – backed with “Doing All Right” – in the United States by Elektra Records and in Thailand by Royal Sound in February 1974. The music video consisted of the band miming to the song on a sound stage.

In the band’s early years, “Liar” was a concert staple, performed as a conclusion to their main set and often lasting for up to ten minutes. “Liar” would start to be played scarcely by The News of the World Tour, to being dropped from the setlist for the Jazz Tour. However, starting with the Crazy Tour. The song begins to be performed scarcely again. By the Game Tour, the song was no longer included in the setlist. The song was revived for a few shows in the European leg of the 1982 Hot Space Tour and rumored to have being played once in the North American leg on that very same tour. The song would be revived again in the Works Tour (though the song was cut down to three minutes or less). “Liar” was referenced in the setlist of the Magic Tour, as Brian May played a partial guitar riff from the song immediately before “Tear it Up”.The song also contains a bass solo performed by John Deacon, the most substantial solo he ever performed live.

As confirmed by the transcription on EMI Music Publishing’s Off The Record sheet music for the song, this is one of three Queen tracks, the others being “Now I’m Here” and “Under Pressure” (their collaboration originally with David Bowie), to feature a Hammond organ.