Browse: Home   /   Jazz Single from over the world

Jazz Single from over the world

was released on their 1978 album Jazz and written by Freddie Mercury. It was released as a double A-side single together with the song “Fat Bottomed Girls”. The song is notable for its video featuring a bicycle race with nude women at Wimbledon Stadium, which was edited or even banned in several countries. The song was inspired by watching the 18th stage of the 1978 Tour de France passing Montreux, where the band were recording Jazz in the Mountain Studios. It starts with a chorus unaccompanied by instruments. The chorus is followed by two verses connected with a bridge, both followed by a chorus. Around the middle of the song is a solo played with numerous bicycle bells. The song has an unusual chord progression with numerous modulations, a change of metre (from 4/4 to 6/8) in the bridge, and multitracked vocal and guitar harmonies.

The lyrics are tipical for the time and contain social, political and pop-culture references, such as religion, Vietnam War, Watergate, drugs, fictional characters (Peter Pan, Frankenstein and Superman), and the films Jaws and Star Wars. The song also mentions actor John Wayne. The lyrics also mention the exclamatory interjection “Hot dog!” and the idiom “Cool it, man!” Brian May has said that the song was not an autobiographical portrait of Mercury and that Mercury did not particularly enjoy bicycling, also noting that despite the lyrics, Mercury was a Star Wars fan.

“Fat Bottomed Girls” was written by guitarist Brian May, the track featured on the album Jazz. The song is formed around an open bluesy, metallic guitar tuning, and opens with its chorus. It was one of the few Queen songs played in an alternative (drop D) guitar tuning. The song’s music video was filmed at the Dallas Convention Center in Texas in October 1978.

The single was mostly distributed in 1978, on 7-inch vinyl records on EMI record label. In Argentina, the titles were translated as “Carrera de Bicicletas” and “Chicas Gordas” respectively. The labels were changed to Pepita in Hungary and to Elektra in the US, Canada, Australia, New Zealand and Japan. The Polish issue had the label of Tonpress and either “Spread Your Wings” on the B-side. Both 7-inch and 12-inch records were issued in the US; “Bicycle Race” also appeared in 1979, on the B-side of the single “Crazy Little Thing Called Love”. In nearly all countries, the covers featured a backside photo of a naked woman on a racing bike, with a red bikini painted over the original photo. A brassiere was added to the US covers. The single reached number 11 in the UK Singles Chart and number 24 in the Billboard Hot 100 in the US. It was certified 2x Platinum in the US by the RIAA , for over two million digital download equivalent units, on 20 March 2018.

UK: standard release. In many country there’s some difference here and there
PS. I’ll try to show you all! :) If something missing or wrong, please contact me at alessandro.carugini@libero.it 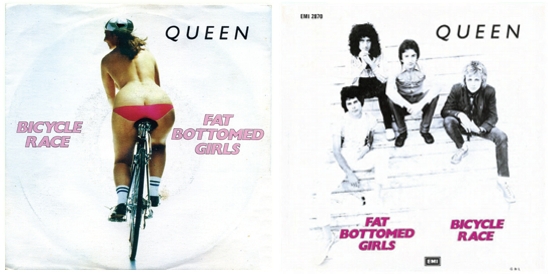 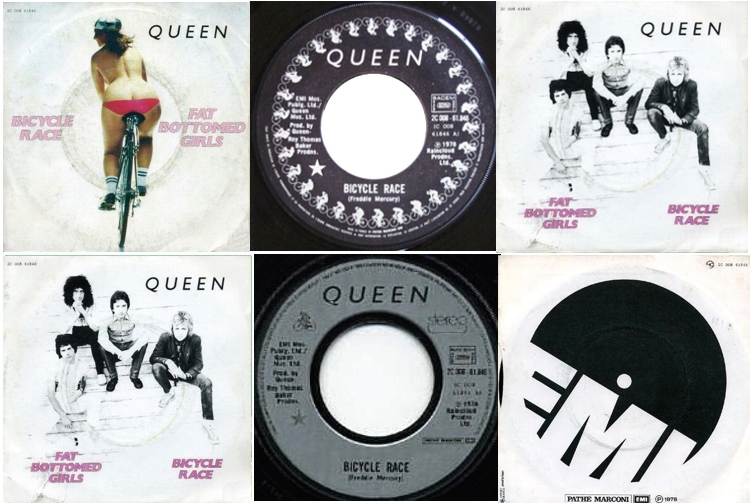 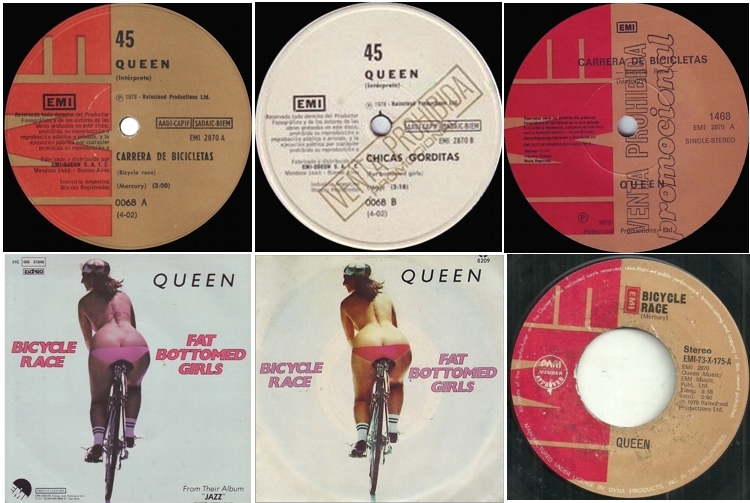 A song written by Freddie Mercury and recorded by Queen in 1978. It is the first track of the album Jazz, categorized as “an up-tempo Arabic rocker” by Circus Magazine.

“Mustapha” was released as a single in Germany, Spain, Yugoslavia and Bolivia in April, 1979. The B side of the single was “Dead On Time” for German and Spanish releases and “In Only Seven Days” for Yugoslavian and Bolivian releases. Also, all four versions had different covers.

The composition’s lyrics are in English, Arabic and an Arabic-emulating gibberish. In live performances, Mercury would often sing the opening vocals of “Mustapha” in place of the complex introduction to “Bohemian Rhapsody”, going from “Allah we’ll pray for you” to “Mama, just killed a man…”. Sometimes the band performed an almost full version of the song from the “Crazy Tour” in late 1979 to “The Game Tour” in 1980, with Mercury at the piano. They dropped the second verse and went from the first chorus to the third. Also notable is that the song was often requested by the audience, as can be heard on “Live Killers”.

GERMANY: standard release.
PS. I’ll try to show you all! :) If something missing or wrong, please contact me at alessandro.carugini@libero.it 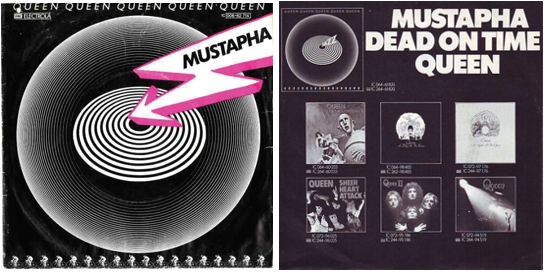 A song by the British rock band Queen, featured on their 1978 album Jazz that was released as a single in 1979. Written by lead singer Freddie Mercury, it was recorded in August 1978 at Super Bear Studios in Berre-les-Alpes (Alpes-Maritimes), France, and is the twelfth track on the album.

Musically the song builds on Mercury’s piano playing, with John Deacon and Roger Taylor providing a bass guitar and drums backing track. The song also provides an example of Queen’s trademark style of multitrack harmony vocals for the chorus lines.

The song also appears in the band’s 1981 compilation album Greatest Hits, and in June 2011, as part of Queen’s 40th anniversary celebrations, an old take of the song containing more guitar parts was included on the bonus EP of the re-released and remastered Jazz album by the Universal Company.

The single reached number 9 in the UK charts but only number 86 in the US; as the album was a top-10 hit, the song got some airplay on U.S. album-oriented rock stations despite its low chart ranking as a single. Despite this the song has grown in stature with time and has been popularised not only by consistent airplay, but by its use in advertisements, television programmes and films, and through cover versions. It has subsequently become one of Queen’s most popular songs. The song was voted as the third best Queen song by readers of Rolling Stone, who noted that “time has also been very kind to it and it’s widely seen now as one of the group’s best works.” The single also has reached Platinum status in the United Kingdom.

The b-side of the single was “In Only Seven Days” except on the Japanese, USA, Canadian and Australian release, “More Of That Jazz” was the B-side. 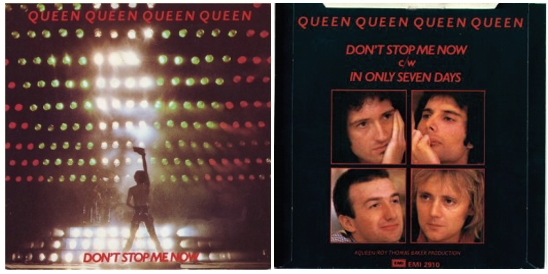 ARGENTINA: PS front and back of the commercial issue. Label from the promo version.

MEXICO: PS front and back of the commercial issue. JAPAN.

Was originally released on their seventh studio album Jazz in 1978, and one year later was released as the fourth and last single from the album. It was written by Freddie Mercury.

The song has been released as a single only in six countries US, Canada, Brazil, New Zealand, and USSR, but failed to chart anywhere. The single was the first and last single of the band in the USSR. In this country the B-side of the single was “Don’t Stop Me Now” but in other countries the B-side was “Fun It”. In 1980 the song had been included to the list of songs for the 1980 Summer Olympics which were celebrated in Moscow.

“Jealousy” was penned by Mercury and features May playing his Hairfred acoustic guitar. The guitar had been given a replacement hardwood bridge, chiselled flat, with a small piece of fret wire placed between it and the strings, which lay gently above. The strings produce the “buzzing” effect of a sitar. This effect had already been used on “White Queen (As It Began)”, from Queen II. All vocals were recorded by Mercury.

USA: standard release.
PS. I’ll try to show you all! :) If something missing or wrong, please contact me at alessandro.carugini@libero.it 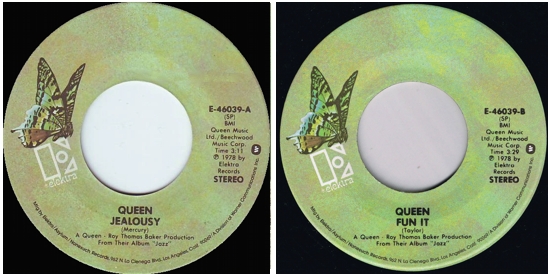