Free In The Park 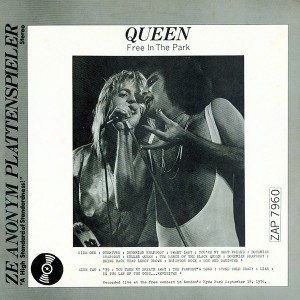 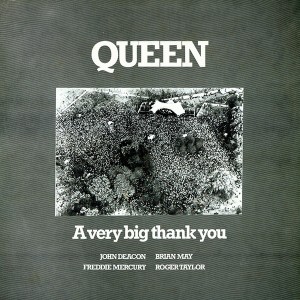 Recorded live at Hyde Park, London, UK, September 18, 1976.
Although the cover suggest that this album is made by Ze Anonym Plattenspieler (A US bootleg label) this is definitely a Japanese LP made by Marc Records. This Japanese bootleg LP released in 1976 is from an audience recording. It was taped off to one side of the stage, as only one echo of Brian’s Brighton Rock solo is heard and is the most prominent. Four songs are missing (Ogre Battle, White Queen, Flick Of The Wrist and Keep Yourself Alive), as the show was squeezed onto a single LP. It’s possible that Ogre Battle and White Queen were omitted because of all the ruckus in the audience, with people being hit by projectiles thrown in the crowd. Although the quality fluctuates (there is distortion in some of the louder spots), it is often quite good. The mix is better than the video soundtrack, as all the vocals are mostly well-balanced. There is another version of this LP (apparently an earlier version, a Japanese bootleg acetate) which sounds even better. The existence of the audience recording debunks the myth that Freddie’s delay during The Prophet’s Song died at the Hyde Park show. It most certainly was working, as it is clearly heard here. It was simply a soundboard mixing issue, as the video feed didn’t pick it up at full volume (it can be very faintly heard on the video). Also, Freddie’s first line of the Bohemian Rhapsody rock section isn’t heard on the video feed, but it was heard by the audience as confirmed by this recording. Also, this audience recording reveals that the crowd wasn’t listening nearly as intently to You Take My Breath Away as history would like to record. People were shouting throughout the entire song, although it’s worth noting that the people heard most clearly on this recording were pretty far away from the stage, as the recording sounds distant. At one point in the song, a large group of people repeatedly chant “sit down” followed by hand claps, almost like a football match.