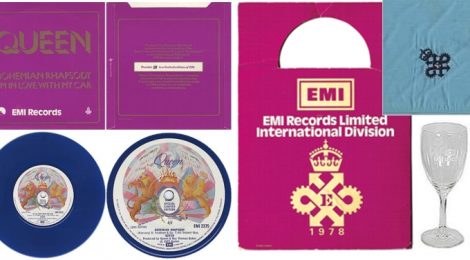 Released on October 31st 1975, Bohemian Rhapsody entered the charts the following week at No. 47, climbing to No. 1 three weeks later, where it stayed for an incredible nine weeks, helped by a memorable innovative video.

Three years later, Queen had gone from strength to strength, creating stadium anthems such as ‘We Are The Champions’ and ‘We will Rock You’, but it was ‘Bohemian Rhapsody’ that was remembered when EMI was awarded the prestigious Queen’s Award To Industry For Export Achievement. Beating off competiton from thousands of other manufacturers, EMI’s International Division won the title due to the massive increase in exports of records by British artists.

Justifiably proud, Paul Watts, then General Manager of EMI’s International Division, decided to commemorate the award with the release of a special single. The choice of artist was easy.

The then current vogue for coloured vinyl seemed to the the ideal way to present this special edition of 200 copies: “We came up with the band’s original colors – purple and gold, as on the ‘Queen I’ cover,” Watts remembered. “These colors signified Queen in a way. We decided on a maroon and gold sleeve and a single in purple vinyl.” But it wasn’t to be: the project became a corporate event, with EMI Records Ltd (and not just EMI the label) getting in on the action. Paul Watt reluctantly relinquished control of the project to “the team upstairs”, imploring them to “make sure you do it right!”

But as Watts had feared, there was a blunder: “Lo and behold, when the record came back from the factory, it wasn’t purple at all, but blue! It was a cock-up, but as we only had 200, it wasn’t worth changing it.” At the EMI pressing plant in Hayes, Middlesex, Production Controller John Tagg had no idea that the vinyl should have been purple, and – acting on corporate directives – pressed the record in blue. “The blue granules were specially formulated for the project,” he remembered.

Pressing the run of 200 blue vinyl singles from the usual minimum of 1,000 or 1,500 black vinyl records was no easy feat, with Tagg and his team having to isolate the special edition from the rest of their system. Getting a pure blue strain of vinyl was also time-consuming, and the Queen single took around three days to produce, costing an exorbitant £4 to £5 per copy, where the usual rate was 50p. To finish off the record, full-colour “Night At The Opera” crest labels were printed and each disc was hand numbered on the A-side and again on the back of the special purple-and-gold sleeve.

Although John Tagg claims that the record was “very much a limited edition” of only 200 and that all the materials associated with the pressing were destroyed afterwards, some unnumbered test pressings or end-of-run copies did slip out. These come with finished labels but no sleeves.

EMI’s International Division was formally presented with the Queen’s Award To Industry for Export Achievement at a three-hour luncheon in the Cotswold suite at London’s Sellfridge Hotel on Wednesday, 26th July 1978. EMI directors and management were out in force, but Her Majesty was absent, sending instead the Vice Lord-Lieutenant Of Greater London, Admiral Sir Charles Madden as her representative. the group themselves were also noticeably absent, being holed up in Montreux, Switzerland, recording the “Jazz” album and holding a typically extravagant party for Roger Taylor’s 29th birthday

The initial 10 copies of blue vinyl singles were framed and given to the members of Queen’s entourage and EMI executives.

For the first time you can see the ORIGINAL ‘Bohemian Rhapsody Blue Vinyl Complete Set’ in the picture below: a limited edition, blue vinyl pressing of the single Bohemian Rhapsody/I’m In Love With My Car, 1978, EMI 2375, produced to mark the occasion of EMI’s Queen’s Award To Industry For Export Achievement, purple picture sleeve and A-side label inscribed in black felt pen (from an edition of 200), together with outer carrying envelope; a pale blue scarf in original packet; an invitation/programme and menu for the celebratory luncheon held at the Selfridge Hotel, London, 26th July 1978; a pen with EMI RECORDS wrote on it; two wine glasses etched with Award logo, EMI Records and date 1978, 6½ inches (16.5cm) high 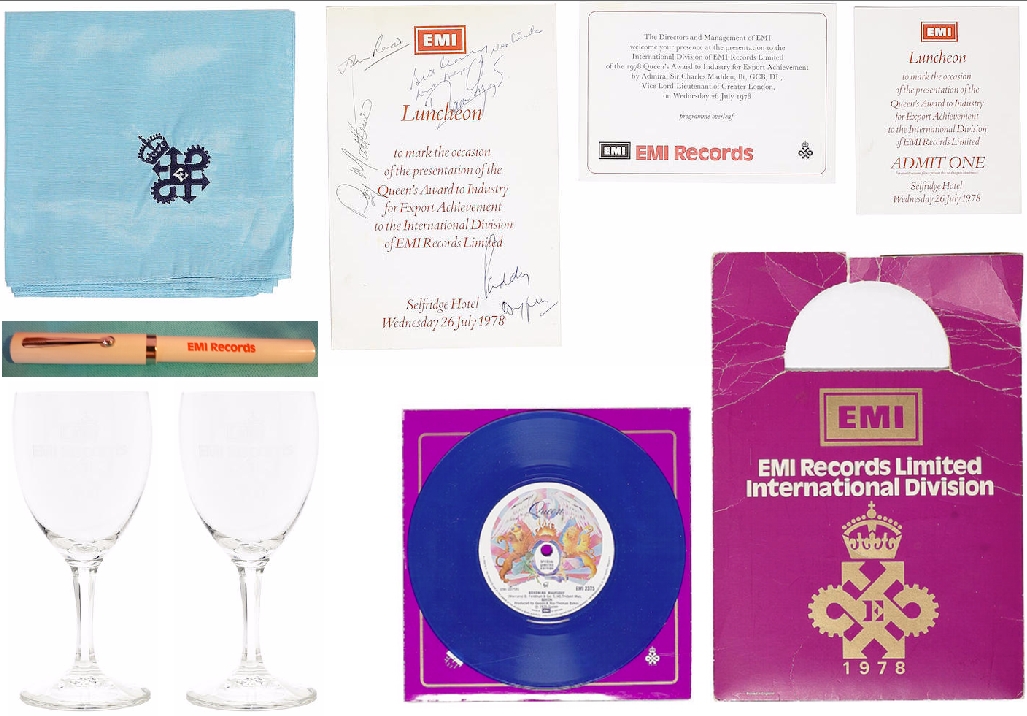