Queen is the debut studio album by the British rock band Queen, released on 13 July 1973 by EMI Records in the UK and by Elektra Records in the US. It was recorded at Trident Studios and De Lane Lea Music Centre, London, with production by Roy Thomas Baker, John Anthony and Queen. The album was influenced by contemporary progressive rock and heavy metal music. The lyrics are based on a varierty of topics, including folklore (“My Fairy King”) and religion (“Jesus”). Lead singer Freddie Mercury composed five of the ten tracks, guitarist Brian May composed four songs, (including “Doing All Right”, he co-wrote with then Smile bandmate Tim Staffell), and drummer Roger Taylor, who both composed and sang “Modern Times Rock and Roll”. The final song on the album is a short instrumental version of “Seven Seas of Rhye”.

Queen had been playing the club and college circuit in and around London for almost two years when the band had a chance opportunity to test out the new recording facilities of De Lane Lea Studios. Taking advantage of the opportunity, they put together a polished demo tape of five songs: “Keep Yourself Alive”, “The Night Comes Down”, “Great King Rat”, “Jesus”, and “Liar”. Despite the demo tape’s quality, the band received only one offer from a record company – a low bid from Chrysalis Records, which they used to try to entice other companies.

They were finally given a break and signed in 1972 by Barry and Norman Sheffield, who ran the successful Trident Studios; however, because the studio was very popular, Queen mainly recorded during the studio’s downtime but were given free use of everything after the paying artists had left; including the latest technologies and production team. One day, while waiting to use the studio, Mercury was asked to record vocals by producer Robin Cable, who was working on a version of “I Can Hear Music” and “Goin’ Back”. Mercury enlisted May and Taylor to record the tracks. These recordings were released on a single under the name Larry Lurex.

The arrangement of recording only during downtime lasted from June to November 1972. The limitations this imposed on them led the band to focus on completing one track at a time, but problems arose almost immediately. The band had thought highly of their De Lane Lea demo tracks, but producer Roy Thomas Baker asked them to re-record the songs with better equipment. “Keep Yourself Alive” was the first song to be re-recorded, and Queen did not like the result. They recorded it once again, but during the mixing sessions, no mix met their standards until engineer Mike Stone stepped in. After seven or eight failed attempts, Stone’s first try met with Queen’s approval. Stone would stay on to engineer and eventually co-produce their next five albums. Another track that proved problematic was “Mad the Swine”, which was recorded for the album but then derailed by Baker and Queen disagreeing on the quality of the percussion. The song was meant be the fourth track on the album between “Great King Rat” and “My Fairy King”. With the issue unresolved, the track was left off the album. It re-surfaced in 1991 as both the B-side to the “Headlong” CD single in the UK, and on the Hollywood Records re-release of the album. The version of “The Night Comes Down” which appears on the album is, in fact, the De Lane Lea demo recording, as the band were unsatisfied with any attempt at rerecording it.

Other recordings from this period, such as two Smile tracks (“Silver Salmon” and “Polar Bear”), “Rock and Roll Medley” (a live encore staple from the era), and the infamous track “Hangman” (whose existence was long denied officially, beyond live concert recordings), have surfaced in the form of a studio acetate disc. 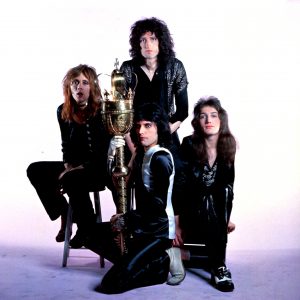 Though the album was completed and fully mixed by November 1972, Trident spent months trying to get a record company to release it. After eight months of failing that, they took the initiative and released it themselves in 1973. During this time, Queen had begun writing material for their next album, but they were disheartened by the current album’s delay, feeling they had grown past that stage, even though the record-buying public was just getting wind of them. They recorded two BBC sessions during the interim. The first single, “Keep Yourself Alive” (the Mike Stone mix, now considered the standard album version) was released a week before the album (UK dates, 6 and 13 July respectively). The track length was edited for release in the US, from 3:47 to 3:30. The US single was issued in October. All countries had the B-side “Son and Daughter”. The album was released in the US on 4 September.

Elektra Records released a single of “Liar” in a heavily edited form on 14 February 1974, with the B-side “Doing All Right”. Elektra later reissued the edited version of “Keep Yourself Alive” in July 1975, this time with the rare double B-side (rare for a 7″ single) of “Lily of the Valley” and “God Save the Queen”. Both versions are unique compared to the album versions. 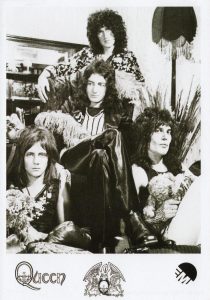 Rolling Stone Magazine wrote, “There’s no doubt that this funky, energetic English quartet has all the tools they’ll need to lay claim to the Zep’s abdicated heavy-metal throne, and beyond that to become a truly influential force in the rock world. Their debut album is superb.”

The Winnipeg Free Press opined that Queen borrowed from other artists, but also compared it favourably to Led Zeppelin, writing, “the band manages to inject such a fresh, energetic touch to most of it that I don’t mind a bit… With its first album, Queen has produced a driving, high energy set which in time may be looked upon with the same reverence Led Zep 1 now receives.”

In later years, AllMusic awarded the album three out of five stars, calling it a “patchy but promising debut from a classic rock group”.

In 1994, Guitarist Magazine ranked Queen the 19th most influential guitar album of all time.

In 2008, Rolling Stone ranked “Keep Yourself Alive” #31 in the “100 Greatest Guitar Songs Of All Time”, describing it as “an entire album’s worth of riffs crammed into a single song”.