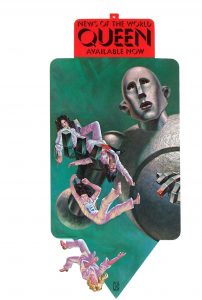 News of the World is the sixth studio album by the British rock band Queen, released on 28 October 1977 by EMI Records in the UK and by Elektra Records in the US. News of the World was the band’s second album to be recorded at Sarm West and Wessex Studios, London, and engineered by Mike Stone, and was co-produced by the band and Stone. Containing the hit songs “We Will Rock You”, “We Are the Champions” and “Spread Your Wings”, it went 4x platinum in the United States, and achieved high certifications around the world, selling over 6 million copies. News of the World is Queen’s highest selling studio album to date.

Having received some criticism that their first completely self-produced project, A Day at the Races, was a “boring” album, Queen decided to shift their musical focus towards the mainstream but remain as the producers of the next album.

After completing the A Day at the Races tour, the quartet re-entered the studio to begin work on their sixth studio offering in July 1977, enlisting Mike Stone as assistant producer at the Basing Street and Wessex Studios in London. They scaled down their complex arrangements and focused on a “rootsier” sound (as Brian May put it). However the staple of the Queen sound, multi-tracked harmonies and guitar orchestrations, still exist on this album, albeit a bit more subtly. News of the World shows Queen’s songwriting less dominated by May and Freddie Mercury, with Roger Taylor and John Deacon composing two songs each. The group completed recording and production of the album two months later in September and released the album on 28 October 1977. 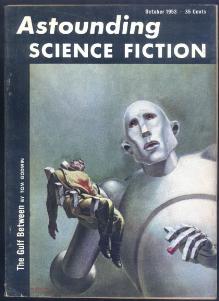 The album’s cover was a painting by American sci-fi artist Frank Kelly Freas. Taylor had an issue of Astounding Science Fiction (October 1953) whose cover art depicted a giant intelligent robot holding the dead body of a man. The caption read: “Please… fix it, Daddy?” to illustrate the story “The Gulf Between” by Tom Godwin. The painting inspired the band to contact Freas, who agreed to alter the painting for their album cover, by replacing the single dead man with the four “dead” band members (Taylor and Deacon falling to the ground with Taylor only visible on the back cover). The inner cover (gatefold) has the robot extending its hand to snatch up the petrified fleeing audience in the shattered auditorium where the corpses were removed. Freas said he was a classical music fan and did not know Queen, and only listened to the band after doing the cover “because I thought I might just hate them, and it would ruin my ideas”, but eventually liked their music. 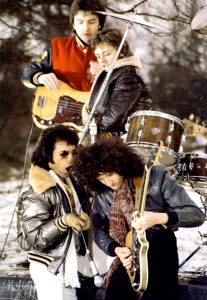 News of the World initially received mixed reviews, mostly reflecting on the differences to the previous predominantly progressive rock sound produced by Queen, and this album’s vast shift towards a more mainstream sound. The Washington Post commended the band’s experimentation within a range of hard rock to soft rock, while Rolling Stone magazine’s Bart Testa found the album’s second side dull after highlights such as “We Will Rock You”, “Sheer Heart Attack”, and “Fight from the Inside”. In a contemporary review for The Village Voice, Robert Christgau said that one side of the album is devoted to “the futile rebelliousness of the doomed-to-life losers (those saps!) (you saps!) who buy and listen”, while the other is devoted to songs about indecent women.

In Creem magazine’s annual poll, readers voted News of the World as the 19th best album of 1977. In a retrospective review, BBC Music’s Daryl Easlea said that the album is an exceptional showcase of “Queen’s unerring ability to sound absolutely like no-other group – even when parodying other musical styles”. Brendan Schroer of Sputnikmusic called it “the great arena rock wonder” with very few flaws.

On 8 November 2010, record company Universal Music announced a remastered and expanded reissue of the album set for release in May 2011. This was part of a new record deal between Queen and Universal Music, which meant Queen’s association with EMI Records would come to an end after almost 40 years. According to Universal Music, all Queen albums would be remastered and reissued in 2011. This reissue included a deluxe edition which contains five additional tracks.

In 2017 Queen announced it would release a multi-format deluxe boxset marking the 40th anniversary of the album’s original issue. It will contain previously unreleased outtakes and rarities from the band’s archives, as well as a newly created “alternative” version of the entire album, dubbed Raw Sessions. Included in the boxset is a pure analogue vinyl LP, cut from the original analogue master mix tapes. It also includes a brand new one-hour DVD documentary created from backstage material filmed during the North American leg of Queen’s 1977 News of the World Tour. In promotion of the anniversary release, Queen released the previously unheard Raw Sessions of “We Are the Champions” and “We Will Rock You”. After this tracks, the band published on their official YouTube channel a new version of “All Dead, All Dead” which features previously unheard lead vocals by Mercury, and was accompanied with an animated lyric video.
Marvel paid tribute for News of the World on the cover of X-Men: Gold #11. Done by Artist Mike del Mindo, the cover depicts a Sentinel holding Old Man Logan and Kitty Pride as Colossus plummets to the ground. A special edition of the vinyl was realesed for the Comic Con in London, featured an alternate back sleeve with the Gold #11 cover. This release was limited to 220 numbered copies.