Jazz is the seventh studio album by the British rock band Queen. It was released on 10 November 1978 by EMI Records in the United Kingdom and by Elektra Records in the United States. Produced by Roy Thomas Baker. It reached #2 in the UK Albums Chart and #6 on the US Billboard 200. Jazz has sold over 5 million copies worldwide.

The album mixes very different styles of music, such as the disco-funk (Fun It) and the vaudeville (Dreamer’s Ball), as well as the usual old rock and roll (Dead on Time) and hard rock (If You Can not Beat them). Curiously, despite the title of the album itself, it does not contain any relevant jazz style pieces, except for the Dreamer’s Ball swing. The eclecticism shown by the band in this work was at the same time a cause for praise and criticism, and the album on its release was cut short by the critic Dave Marsh on Rolling Stone; nonetheless, it reached sixth place in the US Billboard 200 ranking and second place in the United Kingdom.

Among the other attributions, in the notes of the album, in reference to the thunder that is heard in the background of the song Dead on Time, we read “Thunderbolt courtesy of God”, or “Thunder courtesy of God”. Jazz is the first of their LPs not to be registered in the UK for tax reasons. A poster was included with the vinyl portraying the protagonists of the video of the famous song Bicycle Race, where a group of naked girls riding a racing bike pedaled through the Wimbledon stadium. 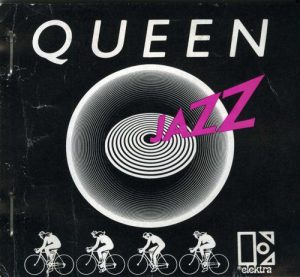 The band, since the mid-seventies had become increasingly popular year after year internationally. In 1977, the Queen had released News of the World which contained the single We Are the Champions / We Will Rock You which proved to be a worldwide success, breaking even in America. The new album, Jazz, is deliberately spontaneous, rock-oriented as its predecessor had been, since the band wanted a simple album, more easily understood by the public, so as to obtain even greater commercial success. News of the World had been completely developed independently, without a screaming producer who could obscure the band’s merits. For the new album, the band decided to recall Roy Thomas Baker, former producer of the acclaimed A Night at the Opera. Another change was to record the album between Switzerland and France instead of at home, to escape the relentless British tax. Parallel to the growing success, even the scandals surrounding the band increase exponentially. While guitarist Brian May and bassist John Deacon live a quiet and reserved life, drummer Roger Taylor and Freddie Mercury are two real “nocturnal animals”, permanent protagonists of the tabloid tabloid articles. Mercury, in particular, stands out from the other members of the band; in the moment in which it is now rich enough to be able to do whatever it wants, it frequently releases to the newspapers recklessly hedonistic statements that cause a sensation. At the time, Freddie broke up with his ex-girlfriend, Mary Austin, and surrounded himself with a large group of friends, many of whom also occasional “lovers”. In 1977, journalist Tony Stewart interviewed him for NME and gave him a highly sarcastic portrait in which the void’s vacuity and frivolous attitudes in the entertainment industry are mocked. Stewart later said that Mercury was very condescending to him during the interview, and that the singer had “lost the sense of reality”. From then on, Mercury and the band members became very suspicious and contemptuous of the journalists, and as a result the press began to criticize them more and more bitterly. 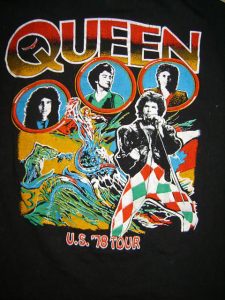 The recording sessions began in July 1978. The members of the group would have liked to be able to work again with the sound engineer Mike Stone, because after many years of joint work he was now considered the fifth member of the band, but this was not possible due to the producer’s private commitments. So the Queen decided to return to work with their ex-producer, Roy Thomas Baker, who in the meantime had produced the debut album of The Cars, which has become a great commercial and critical success. For the first time abroad in the studio, in the Swiss town of Montreux, the band thought that, thanks to the “change of location”, the news would have limited or completely eliminated the conflicts in the studio among the members of the group as it was often success in the past. “But instead we quarreled in the same way as always,” Brian May reported, “only the reasons for arguing were different.” In 1991, the guitarist recalling this period in an interview revealed: “For some time we hated each other … A couple of times I also left the band, but you know how it happens, just for a day and then there I thought of. ” “The source of most of the problems was the authorship of the songs, every author would have liked to see their songs on record”. As Mercury pointed out, the studio Queen was like “four fighting cocks in a henhouse” at the time. The work on the album started at Mountain Studios, and the band found it so good to record there, that later the group members rented a studio there and several other albums were recorded on the Mountain. The recording proceeded in fits and starts between pauses of all kinds and took place in conjunction with the famous annual Jazz Festival of Montreux, which ultimately inspired the title of the album. Subsequently, the studio sessions moved near the city of Nice, in France, to Super Bear Studios, Berre-les-Alpes. As usual, some songs were brought to the studio already almost completely completed, and the other part was written during the recording sessions, drawing inspiration from various sources. The producer Baker in 1982, remembering the period of the Jazz sessions, told that “every evening, he and the band went to a night club near the studio where the strippers were amazing”; they finished recording at 11 o’clock, went to see the show, and then returned to work in the studio.

The design of the album’s front cover was suggested by Roger Taylor, who had previously seen a similar design painted on the Berlin wall. 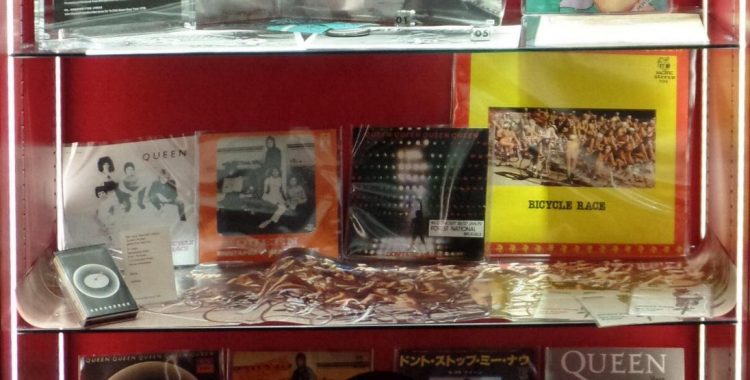 To promote the album and the single Bycicle Race / Fat Bottomed Girls on 17 September 1978 at the Wimbledon stadium in London a cycling race was organized with 65 naked girls, all models specially commissioned by an industry agency. The photo of the group of women was included as a folding poster in the first copies of the Jazz album. In the United States, due to censorship, the poster was replaced by a postcard with which those interested could have requested it. In subsequent CD reissues, and in CD reissues, the poster, considered too “scabrous”, was no longer included in the package. A smaller version of the poster was later included in the Crown Jewels box set. Because of the violent protests by various moralist associations, in the United States the cover of the single Bycicle Race / Fat Bottomed Girls, which featured the backside of one of the girls on the bike (the winner of the race), was censored with a pair of briefs drawn on the back of the young woman.

On October 31, 1978, on Halloween, the band gave a big party to celebrate the completion of the album’s recordings. The famous and infamous party, over the years has become one of the most controversial points in the history of the band. The party was held at the Fairmont Hotel in New Orleans, with about four hundred guests (as well as numerous prostitutes and dancers recruited in various clubs in the French Quarter). The complete management of EMI and Elektra were also invited. After years it is not entirely clear what really happened during the unbridled celebration, in any case, during the following weeks, the press reported that the entertainment of the guests had included: striptease dancers, topless maids, burnt sinks, spellcasters of snakes, transvestites, strippers, etc …, etc … According to reports, the fun cost a total of two hundred thousand pounds. Over the years, the legend grew dramatically, and the rumors were multiplied that they wanted the presence of dwarf hermaphrodites, girls in bikini fighting in the mud, silver trays full of cocaine, and that the party soon turned into a real orgy. Bob Mercer of EMI denied the presence of dwarfs and cocaine and Roger Taylor later stated that many of the statements were exaggerated and untrue, but that much of what is said really happened during the party. 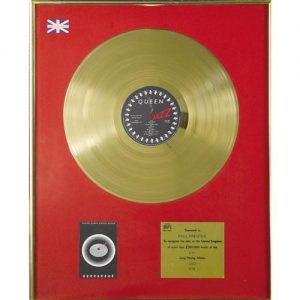 Published November 14, 1978, the record reached the second position in the UK and the number 6 in the United States, although it was the subject of a violent media attack by the critic Dave Marsh of Rolling Stone that tacciando disc vulgarity and banality, ended the review suggesting how “Queen could be understood as the first truly fascist rock band”. Likewise, the record review given by New Musical Express who wrote: “If you have a deaf relative, give him Jazz for Christmas”. On the other hand, the review by Paul Rees of the magazine Q, which assigned four stars to the album, reads: “Their most underrated album, like A Night at the Opera, shows a wide range of different musical styles”.

The album was first re-released in 1991 in the US by Hollywood Records with the addition of two bonus tracks, later in 1994 from Parlophone Records (without any bonus tracks) and finally in 2011 remastered in digital format by Island / Universal and distributed in two editions:
standard edition, containing the original album
deluxe edition 2 CD, containing the original album and a bonus EP 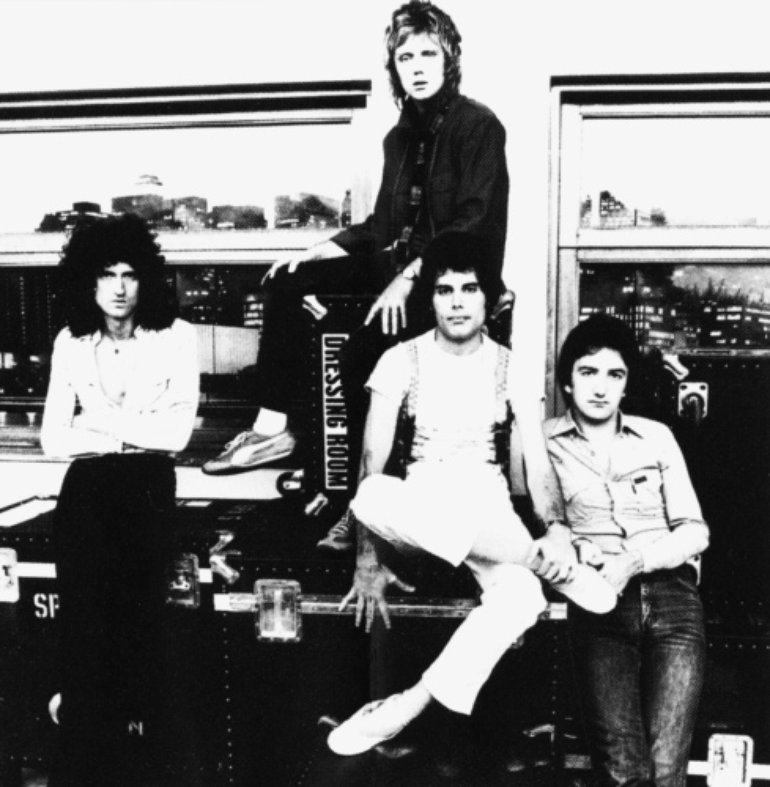