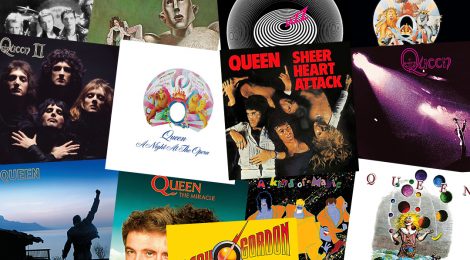 Queen are a British rock band, which consisted of vocalist Freddie Mercury, guitarist Brian May, bassist John Deacon, and drummer Roger Taylor. Founded in 1970, Queen released their self-titled debut album in 1973. Despite not being an immediate success, Queen gained popularity in Britain with their second self-titled album in 1974. Their 1975 single, “Bohemian Rhapsody”, was number 1 for nine weeks (and a further five weeks in 1991) and is the third biggest selling single of all time in the UK. The band’s 1981 Greatest Hits album is the biggest selling album in UK history with 6.0 million copies sold by 2014. The band’s 1991 compilation Greatest Hits II is also one of the UK’s top ten biggest sellers of all time, with 3.8 million copies sold by 2012.

In 1972, Queen signed a production deal with Trident Studios. Later in their career, Queen signed a record contract with EMI, and Elektra in the United States. The band would remain with EMI for the rest of their career, though, in 1983, they terminated their American contract with Elektra and signed with Capitol Records. However in 1990, they terminated their U.S. contract with Capitol and signed with Disney’s Hollywood Records, which has remained the current owner and distributor of Queen’s entire music catalogue in North America.

In 1991, Queen’s entire catalogue was remastered and released by Hollywood on compact disc in the United States, and thirteen albums (all studio albums up to The Works as well as Live Killers and Greatest Hits) were remastered at Abbey Road Studios and released on CD and cassette in the United Kingdom between July 1993 and March 1994. Queen’s entire album back catalogue was remastered and re-released in the UK and rest of the world (excluding the US) through 2011 to commemorate their 40th anniversary (as well as being the 20th anniversary of Mercury’s death). The 2011 remasters were released by Universal’s Island Records label, as the band’s contract with EMI ended in 2010. The 2011 remasters were released on SACD by Universal Music Japan, between November 2011 and April 2012. In an interview with BBC Wales, Brian May announced a new compilation album titled Queen Forever, which was later released in November 2014.