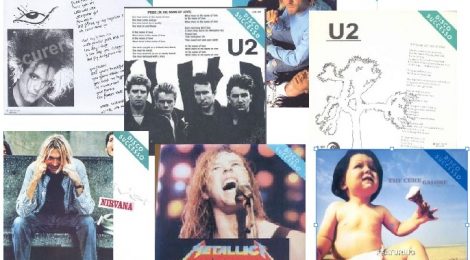 The Story of this Sleeve…

In the late 90s began to turn, in the collector market, some promotional discs with a special PS. Only 50/100 copies were printed for each sleeve, to be used, with an official jukebox promo 7″ inside, for promotion on the ‘Sper’ radio circuit. The PS in question were all of major artists: Queen, Duran Dura, Pink Floyd, Cure, Ramones… and soon they became very rare. The sleeve was marketed as a “radio promo” from SPER Radio Network circuit to promote the song. In the collector circuit were known as SPER Sleeve!

Many signs indicate that these sleeves are fakes:

– the graphic doesn’t look official at all, it’s more like it’s been home made, using random pictures and bits of text taken from the record labels

– some copies of the 7″ contained have heavy spiral scratches, as they have been used in jukeboxes, and not regular players

– writings like “edizione speciale per jukebox” (jukebox special release) on the some sleeve don’t make any sense on a radio promo. Neither does the presence of the jukebox index label on some copies

– all the sleeves surfaced are in mint conditions (even when the record contained is used), which is strange considering they should have been used in radios, and show some wear. Radio stations also often put a stamp or mark on their records

But now, I’m pretty sure, that these sleeves are fake… Someone told me that story… Read it and made your own opinion…

“In the 90’s, in the various fairs of the disc, there was a guy who was buying large quantities of Italian promo juke box records. He bought that disc for resale abroad this disc with ‘special’ covers which created himself…“